Chronicle of a Death Foreclosed: Mysterious disappearance of an Amazonian shamaness

After publishing, in May 2002, a confessional article on Matsigenka grief and mourning based on a disturbing field experience in Peru,[1] then being summoned two months later from fieldwork in Brazil to my mother’s entirely unexpected funeral, I decided never again to read, write or research on the topics of death, grieving, or funerary customs.  It is far too depressing, being an uncomfortable reminder of one’s own mortality, besides cutting too close to home for me personally.  It might even be bad luck. 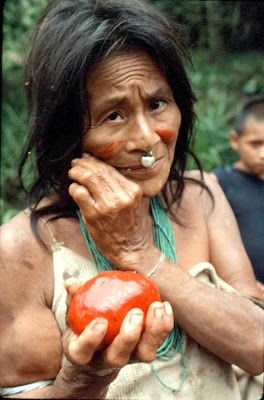 Then something happened:  Angelica vanished.

Angelica, an elderly Matsigenka woman from the village of Santa Marta, was charming, frail and probably senile.  No one knew how old she was, though she seemed to be in her seventies at the time.  She had been a shaman and herbal healer in the old Matsigenka tradition, and her son Guillermo is a widely recognized healer himself.  With her advancing age, Angelica was becoming more frail and forgetful.  I had worked in the village of Santa Marta before, and had tried to record mythological narratives with Angelica.  Though once a renowned storyteller, Angelica’s memory was failing and the stories she told were mere fragments, as Guillermo explained to me sadly one day after I gave up taping a story she could no longer remember.  I was passing through Santa Marta once again a year later, and Guillermo was distraught.

He had been away from the village for a few days, and on returning he found out that Angelica had gone missing the day before.  He and his relatives mounted a search party: given her age and frailty, she couldn’t have walked very far.  Someone had seen her on the path leading towards that hill where the clear spring emerges, you know, where Jonas cut down the kamona to get palm hearts last month.  Doubled over and limping along with a wooden staff:  she couldn’t have walked very far.  They found her trail fairly quickly.  She had stopped to pluck tsipana leaves for steaming fish, you could see the freshly broken stems.  Finally she stopped to rest at the edge of a small stream on a high slope of Jaguar Hill.  She had leaned her wooden walking staff against a tree, stacked the tsipana leaves, taken off her shirt and folded it neatly, and sat down herself.  You could see the impression in the moist earth.  There was a pile of small sticks and some torn leaves there too.  What could she have been thinking?

The staff, the tsipana, her shirt, the sticks and leaves, the impression of her small body were all there, just as she had left them.  But Angelica had vanished.  There was no further sign of her footprints nearby.  They had circled the area at a distance, in case she had walked upstream a ways before continuing.  Besides, without her staff, how far could she walk anyway?

I was only passing through Santa Marta on this trip, and had a brief visit with Guillermo late in the afternoon on the fourth day after Angelica’s disappearance.  He and his relatives had been searching for her all around the community, calling out her name and looking for her trail.  Guillermo was visibly weary, and rubbed his head saying in Spanish, “I am feeling a little bit bad.  My mother is lost!”  He continued in Matsigenka, relapsing occasionally back into Spanish.  He and the rest had given up on finding her alive, and had begun searching for telltale signs of a jaguar dragging its prey.  “If she’s dead, then in three or four days her guts will burst and then we’ll be able to follow the vultures.”

Both he and his sister Judith returned again and again to the details of the last traces they had found by the edge of that stream:  the staff, the carefully stacked leaves, the shirt, the enigmatic pile of sticks, the impression in the soft earth where she had sat.  “It was almost as if she had flown away, right from that spot.”  And suddenly I was reminded of a story I had heard years before, a Matsigenka folk tale about two children, a boy and a girl who had been the soul survivors of a devastating measles epidemic.  Saddened by the loss of everyone they knew, the children had wandered into the forest in the vicinity of an enchanted lake, had put the juice of special plants into their eyes, and had vanished, joining the immortal, invisible guardian spirits of the forest, the Sangariite.  I also recalled countless stories I had heard about the heroic and invincible Matsigenka shamans of the past, whose bodies, upon death, had vanished from their places of rest.  The disappearance of their bodies was taken as proof that they had resurrected, Christ-like, and risen from the dead, joining the immortal Sangariite like that mysterious pair of children.  At the same time, however, I was also reminded of classic ethnographic accounts of elderly Matsigenka in the past who had wandered off into the forest to die, rather than burden their families with caring for their frail, skin-and-bones body which, in Matsigenka conceptions, had already lost its soul and was as good as dead.

I had to continue my own journey, so I bade Guillermo and his family farewell, expressing my sympathies.  As I left Santa Marta, I saw vultures circling in the distance, and noted in my field journal, “I only hope they don’t find her body.  To keep alive the sense of mystery.”

A few months later, I was passing through again and went to visit Guillermo.  After initial greetings and news, I inquired delicately about the search for Angelica’s body.

“Remember last time I saw you?  You were searching in the woods…”

He cut me off, “We searched for nine days.  We never found a trace.  We watched for vultures.  Never found a bone, a piece of clothing, nothing.”

“I was sad for a while,” he continued after a pause.  “Then I took ayahuasca.  Now I’ve seen everything.  Now I know where she is,” he concluded, with the faintest glimmer of a smile in his eyes.

And that was all.  He changed the subject, and I did not insist.  Nor did I need to:  it was clear what had happened.  Angelica and her body had made the perilous crossing of the river encircling the world, escaping the whirlpools and traps set by the Cannibal Moon; had ascended to the Milky Way to bathe in Meshiaari, River of Molting, shedding her wrinkled old skin to gain a youthful, strong body; and now resided among the immortals, the shamans and their guardian spirits, the Sangariite, who in the final analysis are one and the same.

I noted in my field journal, “I have been party to a miracle.  Mystery is alive indeed.”[2]