Sacred Flutes Redux: Cultural revival among the Baniwa of the Upper Rio Negro

Laureano, dignified with a parrot-feather crown and thick horn-rimmed glasses, paddles from the bow of the canoe while his skinny younger brother Oliver, in sweat pants and a baseball cap, rows aft.  Moacir, Laureano’s son, and I are filming from a second aluminum speed boat.  Funded by the Brazilian Ministry of Culture to document his people’s revitalization of ancient rituals banned by Christian missionaries, Moacir’s professional high-definition video camera is much more impressive and expensive than my own humble palm-corder.  We are paddling up this narrow tributary of the Ayari River, reddish-black but translucent like Coca Cola, to the place where Laureano concealed the sacred flutes nearly three decades ago in the icy depths of the creek.  The spot is marked like buried treasure with cryptic scars on a half-submerged tree trunk that only their maker can decipher.  Moacir, himself over thirty, was the last of his village to be initiated in the grueling ceremony of fasting and ritual privations that culminated in the playing of the flutes.  The same flutes that initiated Moacir also initiated his father, and his father’s father.  Nearly a hundred years old, these flutes lie hidden under three fathoms of cold black water directly below the rickety carcass of Laureano’s canoe.


They have come to show me where the flutes are buried, but they will not dive to retrieve them until I have left. Women, children and non-initiates like myself are banned from seeing the flutes, an offense punishable by banishment or even death.  The three of them, all initiated, will return later to recover the flutes, clean, tune and decorate them, and play them tonight for the first time in twenty-five years.

I have worked with the Baniwa Indians of the Upper Rio Negro since 2001, studying their use of plants and their rich knowledge about the dwarf forests, campinarana savannas and swamps along the Brazil-Colombia border.  The sacred flutes, known as Kowai in Baniwa or Jurupari in the regional vernacular, are used across the northwest Amazon by diverse cultural groups speaking dozens of languages who are embedded in a complex web of hierarchical clans and prescribed marriage rules.  At the center of this intricate social system is a secretive male initiation ceremony built around the cult of the sacred flutes. Though the clan system and many aspects of daily life have remained constant over the last hundred years, the initiation rituals and flute cult have been vehemently and systematically banned wherever Christian missionaries, both Protestant and Catholic, are active.  From my first days in Baniwa villages, I heard stories about the charismatic, unrelenting and fervently devout American missionary, Sophie Muller, who fled down the Içana River to Brazil from Colombia in the 1950s.  Persecuted by the Colombian Army for sowing heretical evangelical fervor among Indians, she entered Baniwa territory and continued her remarkable if ethnocidal career, converting village after village of Baniwa en masse to the Protestant faith and prohibiting their "idolatrous" practices such as shamanic rituals and the cult of the sacred flutes.[1]

Anthropologists have described  intrinsic messianic tendencies in the mythology and religious history of the Baniwa and other native groups of the region.  Though evangelical conversion represents a major cultural disjunction, these transformations sometimes contain elements of continuity with the past.  The story of Sophie Muller almost reads like a Baniwa myth.  The social and moral upheavals she brought about are reminiscent of the long sequence of cataclysms and transformations  that were heralded by various Baniwa "messiahs" going back to Kowai himself, the Christ-like progenitor of the sacred flutes.  Evangelical Baniwas have absorbed the Protestant worldview but also molded it to their own core beliefs and aspirations.  Although some aspects of Baniwa religious practice continue in function if not form, sublimated within Protestant trappings, the flutes themselves were maligned, ridiculed and desecrated.  Flutes, ornaments and other ritual paraphernalia were destroyed or discarded by Sophie’s evangelical converts.  Catholic missionaries, active in adjacent regions among the Baniwa and other groups, likewise attempted to abolish the sacred flute cult.

But the sacred flutes were already a well-guarded secret even before the missionaries came.  Elders in some remote regions, wary of losing the powerful mystery, have kept Kowai alive deep in the dark creek beds.  And so Laureano -- with the help of the Brazilian Culture Ministry and a group of anthropologists from the Federal University of Amazonas in Manaus, the Instituto Socioambiental in São Paulo, and more recently my institution, the Goeldi Museum -- is hoping to revive this sacred tradition and initiate his grandsons into the mysteries of Kowai.

The Kowai flutes are not one but many, explains Laureano.  They are played in pairs synchronously by two men, alternating notes.  The pairs of flutes correspond to pairs of long bones from the body of the mythical figure Kowai, sacrificed like Christ by his father the creator-god.  Because the flutes are both sacred and dangerous, they are always hidden by the ceremonial master after any performance.  Laureano will not disclose any information regarding their appearance or construction.  They are always stored underwater between performances, in part to keep them secret, but perhaps also to preserve them.  Apparently, they can remain submerged for decades without rotting.

“The sound is very beautiful,” says Laureano, “You will hear a little later.  But you can’t see.”


Moacir, several companions and I swim down the frigid, shady creek a mile or so out into the big river and then float down to the village.  I am shivering with cold and cramped after the unaccustomed exertion.  Abandoning a portable gas stove with a clogged valve that gives the concept of “Slow Food”[2] new layers of connotation, I start a roaring fire with bits of rotten roof thatch and dry branches gleaned from the sandy scrub forest adjacent to our campsite.  I warm my body, cook a hearty batch of spaghetti, and retire to the mosquito netting to write in my journal.

Far off in the distance, perhaps two miles in the direction I have just come from, I hear an eerie, humming sound.  The sound carries with remarkable force over such a long distance, penetrating the vegetation and carrying around curves down the winding creek.  The village begins to buzz with quiet excitement.  Women come out of improvised kitchens to listen, to look, to point across the sand dunes and scrub forest.  The old men, hidden in some secret grove up the creek, are tuning and testing the flutes:  Kowai is speaking after a quarter century of silence.

My skin puckers and the hair along my arm stands on end as I hear the strange, primordial sounds for the first time.  Though I have listened to old men's descriptions of the flutes and the ceremonies, I never imagined I would ever hear their singular, powerful exhalations.  The sound is hollow, droning, almost aeronautical, like two great gyroscopes whirring in argument or dance.  It strikes me as being neither entirely of nature, nor then again purely mechanical.  It is not at all what I had imagined, some braying trumpet or breathy flute.  It has something of the wind in it, to be sure, but not an ordinary, capricious sort of wild wind.  The wind of Kowai has been disciplined and honed like some natural force tamed to greater intensity, harmony and purpose:  the roar of twin airplane propellers oscillating in and out of synchrony; the gyration of water-wheels spinning in tandem; a flywheel shifting gears.  The music stops, and starts again in a different pitch, deeper and more resonant.  Then it stops and starts again, this time shrill, shimmering, chime-like, almost electronic.  The ancient master musicians run the gamut of Kowai’s paired bones and then lay them to rest in a secret stream branch, ready for the all-night ceremony.

About dusk a light rain begins to fall, and there is a great commotion, and we hear the flutes bellowing around the bends of the creek and out into the deep water, drawing closer as the ceremonial masters paddle towards the village.  Women and children run towards a leaky structure of palm thatch strung with hammocks like cobwebs.  I grab my camera as several men about Moacir’s age, all initiated at the same time he was, tie up a pair of plastic tarps, one blue and one orange, to block the vision of the uninitiated towards the ceremonial house on the sand dune where the ritual will take place.  The flutes begin to whir and hum and circulate, their sound much closer and louder now.  I break out in goose flesh once again.  I look at the shadows of women and children in hammocks, silhouetted like Balinese puppets against the twin orange and blue panels aglow with the setting sun:  a primordial diptych of opposition and harmony.  All is quiet but the patter of rain and the soft cries of children and the drone of Kowai echoing from the beginnings of time.

"The Challenge of Life Hill"

"Wizard of the Upper Silicon"

"Between the Cross and the Pleiades" 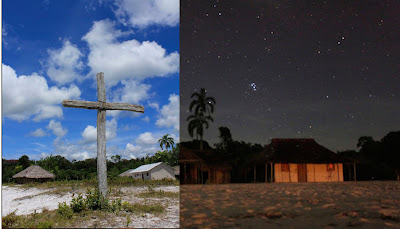 [1] To learn more about Baniwa mythology and religious history, see For Those Unborn (University of Texas Press, 1998) and other works by Robin Wright: www.robinmwright.com
[2] Apologies to Paulo Lima, a gourmet marketing consultant and “Slow Food” advocate who accompanied me on the trip.  He was researching Baniwa chili powder to help create a high-end marketing strategy.  See EstiloGourmand.blogspot.com
Posted by Glenn H. Shepard at 1:54 PM