Surreal Specters: Martin Gusinde and The Lost Tribes of Tierra del Fuego, reviewed in the New York Review of Books

The surrealists’ 1929 Map of the World depicts Tierra del Fuego as larger than Australia: Martin Gusinde's photographs show us why.

When Martin Gusinde was ordained as a priest in Germany in 1911, he hoped to travel to New Guinea to work as a missionary among exotic tribes. Instead, his superiors sent him to Chile to teach at the German school in Santiago. Within a few years, however, he found his calling at Chile’s Museum of Ethnology and Anthropology, carrying out expeditions to Tierra del Fuego in the far south of Chile and Argentina…

Photography was an important aspect of Gusinde’s scientific and humanistic endeavor, and The Lost Tribes of Tierra del Fuego is the first book to address this work in its own right… His portraits especially reveal a tension between Gusinde’s ethnographic training and his humanistic (and artistic) instincts.

Gusinde’s expeditions predate the surrealist movement and the irreverent 1929 map showing Tierra del Fuego as disproportionately large; but his first monograph, including 250 images, was not published until 1931. And yet even if only by coincidence, there is something bewitchingly surreal about Gusinde's photographs of the Hain initiation ceremony, in which young Selk’nam men are hazed by a pantheon of spirits that are revealed, in the final moments (forbidden to women), to be kinsmen in elaborate masks. Several photos show naked male figures standing barefoot in the snow, their bodies painted in bold white stripes on dark ochre and wearing eerie, phallic headdresses

In 1923 Gusinde photographed the last Hain ritual before the Selk’nam were decimated by a final wave of measles and forced to assimilate.

The last fluent Selk’nam speakers died in the 1980s,[1] and Herminia Vera, who spoke the language as a child, lived until 2014: at ninety-one, she was born the same year Gusinde photographed the final Hain ceremony documented in this book. But Joubert Yanten, a linguistically talented mestizo man (he goes by the tribal name Keyuk) has sought to encourage a cultural revival…

In a recent interview with the New Yorker[2]  Keyuk explains the etymology of the group’s name: “The word ‘Selk’nam’ can mean ‘We are equal,’… though it can also mean ‘we are separate.’” Gusinde’s camera captures the essence of this fundamental enigma of the ethnographic encounter.


Read the full review at The New York Review of Books 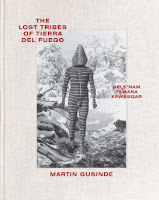 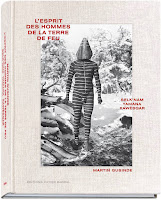