An Ax to Grind: Napoleon Chagnon, the Yanomami and the anthropology tribe

I felt like I had walked right into one of the Napoleon Chagnon/Timothy Asch Yanomami films. At one end of the circular village enclosure, a shouting match had erupted between two Yanomami women. As the argument continued, a crowd began to gather divided among two opposing groups, one around each woman: a sketch-picture, like one of Chagnon's genealogy diagrams, of the social tensions and kinship alliances in the village. Towards the other end of the village enclosure (known as shabono in Yanomami) more people watched from a distance, whether waiting to take sides or just spectating, I couldn't tell. There was an electric crackle of tension in the air, so different from the calm rhythm of village life that had reigned up to that moment. 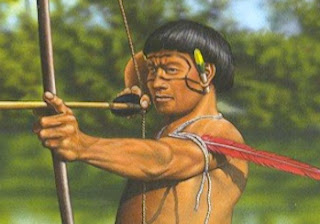 I am admittedly no Yanomami expert; on the contrary, this was my first, and so far only visit to the group. But having read Chagnon's once-popular textbook ethnography, The Yanomamö (originally subtitled, "The Fierce People") and having seen and taught his film, "The Ax Fight," several times, I was struck with a remarkable sense of déja-vu: that film also involves a verbal duel between women that escalates into full-fledged physical combat between two men. As I watched the unfolding drama in the shabono, the shouting continued and a few men towards the back of the opposing groups peeled away from the crowd and returned to stand at attention, gripping long, sturdy tree saplings: the same style of dueling clubs seen in the film made 30 years prior.

It was April of 2004 and I was taking part in a large Brazilian scientific expedition to the Yanomami village at Marari, inside the vast binational Yanomami indigenous reserve just across the Venezuelan border from the region where Napoleon Chagnon had worked decades earlier. In fact, Venezuelan Yanomami from the group "Shaki" (Chagnon's Yanomami name) once studied had recently visited Marari. The controversy surrounding Patrick Tierney's book, Darkness in El Dorado, published in 2000, accusing Chagnon and other scientists of misconduct and even genocide, was still roiling the anthropological and indigenous rights communities in the U.S. and South America, although the Yanomami at Marari had no idea about the international scandal that was unfolding in their name.

Ricardo, a Brazilian Protestant missionary who was assisting the scientific team and who has worked with the Yanomami for over 25 years -- apparently becoming in the process more Yanomami than the Yanomami have become Christian -- told me to run and get my camera.

"There's going to be a fight," he said. Then he turned to leave.

"Nah, happens all the time. You stay, you're an anthropologist, should be interesting. Call me if anyone gets hurt."

But no one got hurt. Instead, the shouting subsided, the momentary tension dissipated together with the crowd, the men discreetly put away their clubs and the village returned to normal: the public spectacle of a Yanomami duel is as much about containing violence as engaging in it.

What no one remembers about "The Ax Fight" is that there is no ax fight in "The Ax Fight." The sharp edge of the ax, though raised in the climax of the film, is quickly turned around to the blunt side and never deployed, defusing what could have been a lethal turn to the explosive but highly ritualized stick-duel that Timothy Asch captured on film. I guess "The Stick Fight" doesn't have quite the same ring.

Another thing to remember about "The Ax Fight" is that exactly one month after it was filmed on the last day of February in 1971, Second Lieutenant William Calley of the U.S. Army was found guilty for his participation in the massacre of some 500 unarmed Vietnamese civilians at My Lai three years prior. U.S. casualties in Vietnam up to 1971 surpassed 45,000 (one and a half times the current Yanomami population) and total Vietnamese casualties of that war will never be known, though the number is likely over 5 million.

So much for "The Fierce People."

Remembering the 10th anniversary of the U.S. invasion of Iraq, here is a bit of dark humor written as the bombs rained over Baghdad:

Anthropological ethics must evolve in response to undeniable world realities.  Recent events have unmasked the fallacy of cultural relativism while reliable intelligence has demonstrated its connection to a global Praxis of Evil.  The current Code of Ethics entangles us in fruitless obligations toward foreign nationals to the detriment of American interests and security.  With resolve, we, members of the Guild of Outmoded Phrenology, have drawn up a Code of Anthropological Ethics for the New American Century, reviving cultural evolutionism and its foreign policy imperative, imperial expansion, while restoring the comfort and moral clarity of ignoring history.  The full document, “Ethics, Freedom, Democracy, American Interests and the New World Order, not Necessarily in that Order” is available at www.notinthatorder.ord.   Here are responses to some frequently asked questions:

1.  What should I do in the event that the clan, tribe, religious sect or rogue state where I am conducting research is attacked by United States Armed Forces?

Because the American Anthropological Association does not issue a uniform, anthropologists dress in local costume and may be considered unlawful enemy combatants, subject to indefinite detainment, interrogation, and sentencing without legal council (note: “gone native” defense strategies are not admissible).  We urge anthropologists to maintain frequent contact with their Embassy while engaged in fieldwork, and suggest changing regions every few years to avoid perilous linguistic competence and cultural identification.  In the event of a sudden U.S. attack, we advise field anthropologists to demonstrate their peaceful intentions by removing all clothing and, if time permits, shaving head and facial hair before strapping themselves with duct tape to a gurney. 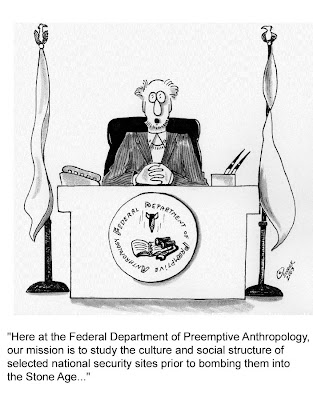 2.  Are there provisions in the new defense budget for anthropological research?

We are excited about new funding modalities emerging from the Doctrine of Preemptive Anthropology.  Security and intelligence agencies will fund studies of local conditions, social networks and military targets in strategic regions before they become a security threat.  Because of the broad definition of the preemptive doctrine, grants will be open for all geographic regions, but research is subject to certain restrictions and conditions.

Yes.  The new Department of Homeland Anthropology will promote studies of patriotic moral values illustrated in popular culture.  An analysis of the epic film Star Wars, for example, reveals an archetypal story of the battle between good and evil that is instructive during this moment of crisis.  A mighty, technologically advanced Empire amasses a vast war apparatus that it plans to test, thereby cowing galactic resistance, by destroying a remote planet harboring a primitively-armed rebel group believed to maintain ties with a robed, bearded religious guru who lives on a war-ravaged desert planet in a cave, has an unusual six-syllable name beginning with “O,” yet who is connected by disquieting family and pedagogic ties to the Empire’s cowboy-booted usurper...

4.  I am carrying out ethnomycological research with South Korean matsutake mushroom gatherers, and my informants are concerned about U.S. military contingency plans that include nuclear strikes against North Korea.  Would such an attack constitute the use of “weapons of mass destruction?”

No.  By definition, all weapons used in the defense of freedom, liberty, and American interests constitute constructive purposes, and hence are not weapons of mass destruction (WMD).  The correct term for such arms deployment is “Wherewithal to Motivate Democracy,” also WMD, but the similarity is merely coincidental.

5.  Could the same logic apply to other nations’ use of military force against enemies or in the name of national interests?

Yes and no.  It all depends on which nations, whose enemies, and in what national interest.  This is called strategic relativism.  Note the advantages over cultural relativism, where all people are valued equally.

6.  Could anthropologists contribute to the search for Iraqi WMDs?

Certainly.  Anthropologists have pioneered studies of mythology, folklore and urban legend, and are unrivaled except by certain National Security advisers at maintaining unwavering ideological stances in the complete absence of empirical evidence.

7.  Given the broad surveillance powers ceded by the U.S. Patriot Act, are there any anthropology textbooks or courses that should best be avoided?

Avoid  books, articles and courses whose titles include the words hegemony, history, Islam, Sumer, domination, resistance, gender, colonialism, or post-anything, as well as those having colons, hyphens, quotation marks, parentheses, and other unpatriotic punctuation.  Anything published after 1968 might be considered suspect, especially titles by French authors, those with Arabic last names, and works by Noam Chomsky, Susan Sontag, …//doha. bbrother.aphage/cdua.exe//line 81 match detect//Content-type: multipart; boundary=S_31568_12728 <<Anthrophage software is connecting to Central Database on Unpatriotic Academics>>…