Why I Sometimes Wish I Were an Armchair Anthropologist

No figure in the discipline is more despised than that smug Victorian fixture, the Armchair Anthropologist. The best antidote for this regrettable legacy is Fieldwork, philosopher’s stone of ethnographic pursuance. Hence, I spent much of the past three decades squatting in canoes, slithering up muddy banks and trekking to remote villages. Scorched by the sun, wracked by fever, gnawed by pests, turned inside out by parasites and ritual narcotics. More than ever, the cozy, urbane musings of the Armchair Anthropologist should seem anathema. Yet as I approach fifty, my body begins to ache and I sense the allure of a temperate climate and a comfortable place to sit. I find myself reflecting on my maligned predecessor with envy as I count the reasons... 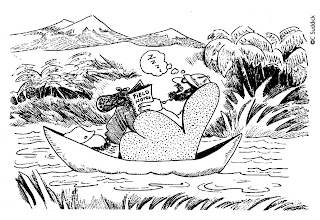 (1) The Armchair: Ah! Just the sound of it soothes my suffering coccyx. What an accessory on protracted canoe trips, and a cozy alternative to planks and dwarf school desks for taking field notes. I have been admiring an Italian reading chair in a chic store in torpid downtown Manaus. I sink into its cool leather embrace and imagine sipping tea and nibbling scones over the yellowed parchment of The Golden Bough. But the price tag startles me back to reality and I return to my sweltering apartment to peruse Anthropology News atop my humble porcelain throne.

(2) The Menu: Actually, I’ve grown quite fond of smoked fish, endangered species soup and manioc in all conceivable forms and some inconceivable ones. Beats Victorian British fare, and I’ll take cool manioc beer over warm bitters any day. The problem of fieldwork cuisine is not quality but rather variety. Colonialism, for all its errors, brought a plethora of take-out options: Chinese, Indian, Middle Eastern. Let the floodwaters wash away my field notes, but please, not my tin of curry.

(3) Biodiversity: Fact: there are more ant species in a single Amazonian tree than in all the British Isles. I haven’t seen the figures for mosquitoes, gnats, sand flies, ticks, chiggers, bedbugs, fleas, bot flies, chigoes, filaria, pinworms... Biodiversity sure looks great on those BBC specials. Maybe I’ll join the Armchair Anthropologist for a warm beer and tellie after all.

(4) The Language Barrier: English, German, Russian, even Sanskrit were important languages for 19th century armchair anthropologist. French is the language of choice for 21st century neo-armchair anthropology, though much of it is Greek to me. French names sound impressive, especially hyphenated ones. I have considered publishing under the pseudonym Harvée-Chepardieu. My métier is among Amerindian languages, complex and poetic tongues, but thanks to an over-zealous Gideon, the only book available is the Bible. Try explaining to a native of the upper Amazon what a camel is, how hard it is get one through the eye of a needle, and why anyone would go to so much trouble when three sips of ayahuasca will take you there any night of the week.

(5) The Edible Complex: Anthropology is a curious science: only one syllable distinguishes it from cannibalism. Who’s on the menu for this year’s Anthropophagy Association Meetings? The best way to achieve notoriety in the field is by publishing a lurid exposé about a renowned anthropologist. The technical term is endocannibalism:  consuming one’s own kind, usually the dead or infirm, often with a degree of reverence. Exocannibalism by foreign tribes is rarer and more violent, sometimes associated with severe nutritional stress. Either way, the armchair provides a safe view from the sidelines.

(6) Foggy Discourse Breakdown: The banjo is a hefty and temperature-sensitive instrument, not amenable to travel in the tropics. It is not useful for firewood, though the taut strings grate manioc (earplugs recommended) and the hide can be boiled into soup stock in an emergency. Both my banjo and I would have fared better on a plush fauteuil. Banjo virtuosos play breakneck solos improvised around a vocabulary of licks or ‘riffs’. Trendy anthropologists riff floridly on the latest jargon. Neither kind performance is very pleasant to listen to, but one can’t help but admire the skill required.

(7) La Mode: Armchair anthropologists dress and theorize more fashionably than I do. The last time I made a fashion statement was in a Peruvian village at the turn of the century. I figured I had nothing to lose, what with Y2K (little did I realize the apocalypse had been postponed). After much manioc beer and three rusty needles, I won a dangling nose ornament and a lingering infection of the nasal septum. ‘Going native’, apart from dangerous, is hopelessly obsolete. But what today is old-fashioned, next year is retro and by mid-century, could be high fashion. The key is patience and an occasional daub of antibiotic ointment.

The End: These days, students and activists challenge me with the retort I once leveled at the ethnographers of yore: “You took much information, but what did you leave behind?” The answer is complex, and not likely to satisfy those who have not sat there themselves. But among the most valuable assets left behind in those far flung villages was my youth. Youth and the lumbar spine. Few things are more precious. Still, I have few regrets, and in exchange, I have gained fine friends, a sense of humor and an appreciation for many small comforts. I’m willing to overlook my petty differences with the Armchair Anthropologist, if only he’ll make room for me and my sore end on his couch. 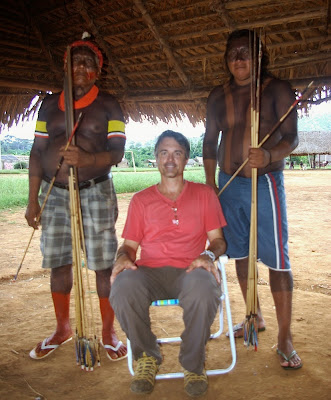 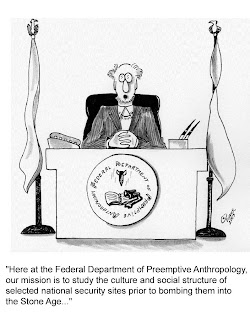