Bittersweet: An excerpt from "Sorcery and the Senses" (full text)

Every time I eat watermelon I remember that day. It was the dry season, when the rust-red floodwaters of Quebrada Fierro or “Iron Creek” subside to a lazy trickle, exposing wide, meandering beaches near its mouth on the upper Manu River in southern Peru. I was with a group of Matsigenka men and boys, we had spent the past few hours under a feverish noon sun portaging boat, motor and gear to circumvent a stubborn Dipteryx trunk, with wood as hard and impervious as tempered glass, that blocked dry season passage along the creek.

It was the summer of 1995 and I was taking Hector, a dear Matsigenka friend who called me “brother,” to meet up with a film crew camped out at the research station of Cocha Cashu down river. I was helping Hector’s community negotiate for an upcoming shoot. Cheronto, who came from a rival community nearer the station, was the best boat pilot in the region. He was taking us down the river to close the negotiations.

Sweaty, thirsty, and famished, we trudged across the searing sand when someone up ahead cried out, “Watermelons!” Senegui, an affable widower who lived nearby, seeded the beaches with watermelons every summer, and this year was a bumper crop.

“There are more over here,” called someone else. “And are they ripe!” 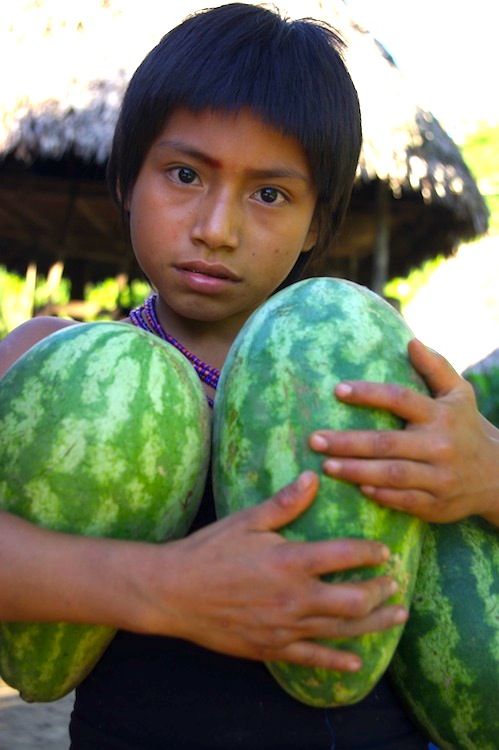 There was only one machete, so everyone else began smashing the melons rudely on driftwood, bent knees or unripe melons still on the vine. There was no question of mere observation, of imposing etiquette or restraint: someone with sticky hands passed me a plump green specimen and I joined the frenzy. We eviscerated melon after melon, first cracking them in half and then taking a plunge with our fingers through a yielding halo of seeds to pull out the dripping pink heart.

The melons were cold and sweet and heavy with juice that dribbled down our faces, chests, arms and legs as we crammed the pulp into our greedy mouths. We ate only the plumpest, sweetest, juiciest melons, and even then only the seedless central column. We discarded less ripe specimens entirely after breaking them open, and tossed aside fully ripe melons half-eaten in wanton extravagance, not bothering to pick through pesky seeds: the next one might even be sweeter.

No one spoke until we were sated. The beach was littered with seeds, rinds, melon entrails and a crazed reticulation of trampled vines and footprints. We washed our sticky hands and faces in tepid water along the stream bank. We must have consumed or destroyed a dozen watermelons each, and Senegui’s crop was mostly gone.

“Won’t he be angry?,” I asked one companion with belated guilt.

“No, we’ll tell him we were hungry. The first floods would have washed them away anyway. Besides we left lots of seeds, they’ll grow back next year.”

About ten days later, I fell gravely ill and had to be evacuated first to Cusco, then Lima, then back to the United States. The film segment on Hector’s community was abandoned. Hector and Cheronto quarreled during the trip, among other things blaming one another for my illness. It was Cheronto’s fault, for beaching the boat at his father-in-law’s place to get us all drunk on putrid manioc beer rather than going straight to the film crew’s camp as planned. No, it was Hector’s fault, for letting Glenn pluck and sniff one of those stinkhorn mushrooms to show the film crew: everyone knows they reek with demonic vapors.

Hector was dead three years later of a horrific, wasting illness, no older than 35, and most attribute his death to sorcery by Cheronto or someone in his family. Cheronto is an old man now, ostracized and expelled from his community but content at an isolated settlement with two wives, numerous children and plentiful game. None of the three of us could have known it at the time, but those were the last watermelons we would ever eat together.

They were the best watermelons of my life.

Excerpt from my forthcoming book, Sorcery and the Senses

First published by The Common

Also published by The Common: "The Challenge of Life Hill: Magical landmark in the Brazilian Amazon metes out destiny like the Fates"