I traveled last November to Manu Park in the Peruvian Amazon with writer Emma Marris to guide her among the Matsigenka people for a story she published this week in National Geographic. In this post from the science blog The Last Word on Nothing (reproduced with permission), Emma describes her visit to the water purification system recently inaugurated in this remote village by the charity organization Rainforest Flow.

Last November, I went to the Peruvian Amazon on assignment for National Geographic.  I focused on a group of indigenous people, the Matsigenka, living inside Manu National Park.

One of these people is Alejo Machipango[1], a hunter, farmer, and member of the water committee for the village of Yomibato. Alejo is about 32, but I would have guessed his age at 22. He is married and has several kids. He is a jokester. He likes chewing coca, drinking manioc beer. He takes his arrows with him most places, just in case. I saw him shoot at some birds, but never hit one. And he always laughs when he misses.

One day, Alejo takes me to see the spring where Yomibato gets its water. The water system in the village was installed by a charity called Rainforest Flow between 2012 and 2015.

A few generations ago, the Matsigenka used to be more dispersed on the landscape. Each family lived apart, and households moved often. The whole community would gather together once a month, on the full moon, and have a big party with manioc beer. But many families decided to move to Yomibato to be near the school and clinic. As the community grew to several hundred, the local river and streams became contaminated with bacteria and waterborne illness became a chronic problem.


The newly-installed water system itself is a very simple slow sand filtration setup. Water is piped from a spring away from the main village to a series of three portable geomembrane tanks[2] filled with sand and rocks. Microbes living on the sand gobble up bacteria, viruses, Giardia, Cryptosporidium, and parasites. The water is stored in a 30,000 liter bladder tank that is essentially a big tough geomembrane pillow, then is distributed throughout the village through pipes. The whole system is gravity fed, so there are no pumps, no electricity required, no moving parts. It is also light and easy to transport by canoe. It was designed by hydrological engineer Humphrey Blackburn. The water committee clean the filters every couple of months and repair pipe breaks, and that’s about it.

We cross the river by canoe, stop to look at the filters and reservoir, and then start climbing the foothills of the Andes towards the spring. When we get there, the spring itself looks like nothing. A wet spot in the ground. A pipe with holes in it is buried below the surface, I am told.

We sit down to rest in the hollows made by the huge buttressed roots of massive fig trees. Alejo says he knows a tree nearby that is fruiting, and he and his friend Alex disappear, then reappear with their T-shirts filled with brown seed pods, about five inches long. They are called azucar huayo in Spanish; koveni in Matsigenka[3]. The water committee hack them open with machetes and begin eating the sweet brown fluffy stuff inside. It is almost too sweet.


I ask Alejo about laying the 16 kilometers of pipe the project required. “Everybody came to work,” he says. “The women came. We all suffered a lot.”

I ask him if it was worth it. Sometimes, I think, development projects are more about what rich people think a community ought to want, rather than what they actually do want. “If we had to do it again, we would.” Alejo says. “One of my children died of diarrhea, and I had it many times.”

He says this so matter of factly that I don’t say the kinds of things I would say if someone back home told me their child had died. I suppose that in a place where people have a dozen kids and where childhood mortality is relatively common, it is possible that the etiquette is a bit different. But in truth, I am stunned that this happy-go-lucky guy who looks like a teenager has lost a child. And as a mother, I feel that vaguely sick feeling you get whenever you hear about any child dying.

I wonder if he is on the water committee because his child died, or if he just thought he’d make a little money without having to leave the village—which is the way most people make money in Yomibato, if they need some for soap or cooking pots or gasoline. But I don’t know how to ask him any more about this dead child.


The American woman who runs Rainforest Flow, Nancy Santullo, sees clean water as a basic step on the road towards empowering indigenous communities that have historically been victimized by outsiders: paid less than non-natives for their work, denied benefits owed to them as citizens, abused by those sent to help them.

We walk back along the pipe, and it is a hot day, like every day. When we get to the first house of the village, I stop and take a long cool drink from the tap.

Find out about Rainforest Flow's water projects in indigenous communities of the Peruvian Amazon at rainforestflow.org 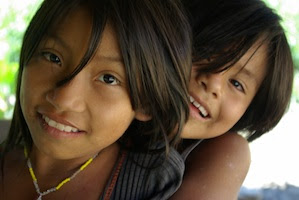 Read more about the Matsigenka people and Manu Park in the June 2016 issue of National Geographic:

The Power of Parks: Nature in its full glory — with hunters
by Emma Marris
photography by Charlie Hamilton James

Loss in Eden
by Susan Goldberg
photography by Glenn Shepard 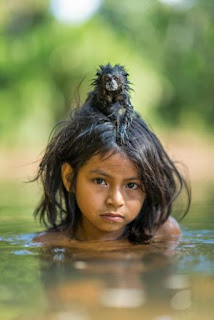 Notes:
1.  As a young boy, Alejo appeared in the Discovery channel documentaries Spirits of the Rainforest (winner of two Emmys) and The Spirit Hunters, both filmed in Yomibato in 1992. Alejo's grandfather, Mariano Vicente, a storyteller, shaman, and "star" of the films, passed away in 2012. The Spirit Hunters , narrated by James Earl Jones, streams free online at Culture Unplugged.
2.  Slow sand filtration is a centuries-old technology used by many small towns as well as by the U.S. military on extended combat missions and the U.N. in disaster relief efforts. Read more at slowsandfilter.com/.
3.  Azucar huayo (or jatobá in Brazil) is a legume seed pod from the tree Hymenaea courbaril L.