Gift of the Spider Woman: Spinning, weaving and womanhood among the Matsigenka of Peru

The moon is bright, the night is giddy with festivities and Shanuiva has emerged from her cage. Jaula, literally "cage," is how Spanish-speaking Matsigenka refer to the palm leaf enclosure where Matsigenka girls spend their months-long initiation after first menstruation. However the native Matsigenka word for this rite is far more appropriate: antarotira, “the time during which she becomes an adult.” Shanuiva is pale and lovely, with woven cotton armbands tight around her plump biceps, thick necklaces of beads and animal teeth whispering between her awakening breasts, and a freshly shorn head that gives her the serenity and dignity of Buddhist nun.


During her three-month-long ritual seclusion, Shanuiva shunned sunlight and the admiring glances of men, remaining inside the small enclosure. She ate a special diet of boiled manioc, palm hearts, bland boiled fish and the breast meat of succulent game birds. She was allowed to leave only at dusk or dawn to bathe and relieve herself, accompanied by her mother, grandmother or aunt. On these brief excursions, female relatives might teach her some of the closely guarded secrets of adult womanhood, such as medicinal plants in the garden or along the path: bark to chew to keep her teeth healthy and strong, leaves to heat and rub to remove unsightly pubic hair, aromatic roots to delay, induce or terminate pregnancy, to facilitate childbirth, to ward off illness and evil spirits that might attack her coming children, to keep her husband faithful, to steady her hands when spinning and weaving cotton.

But aside from her budding adolescent beauty, her pale skin, plump arms, shorn head and esoteric knowledge gleaned, Shanuiva has emerged from her ‘cage’ with an essential and hard-earned treasure: a roll of handspun cotton thread nearly the size of a soccer ball. She has been spinning cotton nonstop for most of her three month seclusion. Indeed almost every time you passed by the enclosure, you heard the percussive “Slap! Slap! Slap!” as she beat out cotton seeds and joined individual cotton balls into long matted locks, or the distinctive grating sound of the palm spindle whirling in a calabash gourd bowl with a pinch of fine sand in the base.


After months of labor, Shanuiva has emerged from her seclusion with enough cotton to weave her future husband’s cushma, the distinctive, striped tunic worn by the Matsigenka. It can take close to three miles (5 km) of handspun cotton to make a single large cushma. The native Matsigenka word for this tunic is magatsi, which means literally “sleeping bag,” since the cushma is used both as formal attire for men (for example, during festivals, shamanic ceremonies and community meetings) and as a kind of sleeping garment for cool nights in the high-elevation rainforest of the Andean foothills.

Relatives and friends have come from different small communities from miles around, bringing their adolescent sons to meet the young initiate and judge her health, beauty and industriousness, and perhaps to begin negotiating with Shanuiva’s parents about a marriage union some time in the future. For the time being, however, she will enjoy the bright moonlit night, the foamy white manioc beer, the music and dancing and festivities of her grand debut.

Matsigenka women reserve weaving for the sunny days of the dry season, from May through September, since weaving is a decidedly outdoor activity. A full-length cushma can be as much as three yards long on the loom, making it almost impossible to weave in the small house interior. Good lighting, good vision, and a steady hand are also required. Indeed, Matsigenka women have a secret arsenal of medicinal sedges to ensure that the thread they spin and the fabrics they weave are fine, strong and even.


The large ball of cotton thread is wrapped into a single great loop (roughly the form of two overlapping figure-eights) around a series of vertical palm staffs, forming the warp of the textile. Generally, both warp and weft are composed of paired threads, given the cushma a rather loose weave. Once the loom is assembled, the woman stretches it out from a high house post, and begins the long, repetitive work of shuttling the bobbin through the opening between the two warp layers, beating the new layer of weft threads in short chops with a flat chonta wood stave, pulling up on the heddle rod to reverse the two layers of warp, and shuttling the bobbin once again, building up the horizontal weft threads row by painstaking row.


The end product is a single loop of fabric. To make a cushma, the top of the loop can be sewn shut, leaving openings for head and arms. Smaller pieces serve as shichakentsi, the traditional skirt worn by Matsigenka women and girls, or as tsagompirentsi, baby slings. A slightly larger open-loop shichakentsi serves as a kind of all-purpose tube-toga that can be slung elegantly over one arm when standing. When sitting, the taut tube becomes a kind of cross-legged armchair with full lower back support. It also doubles as a blanket, a mosquito net, a sun visor, and a sling for carrying toddler children or firewood: far more useful than a mere towel.


The simplest cushma designs contain only alternating rows of reddish-brown stripes, obtained by dyeing selected warp threads with the bark of potsotaroki (Tapirira guianensis), a large rainforest tree in the mango family. Men's cushmas are sewn shut with the stripes aligned vertically, while women's garments have horizontal stripes. In some regions, the local style is to dye the entire tunic reddish-brown, a design other Matsigenka jokingly refer to as "deer cushma." More complex weaves incorporating geometric motifs are obtained by adding supplementary, dyed weft layers, however this more difficult work is generally reserved for smaller pieces, notably woven cotton bags (tsagi).


Sometimes, a plain woven cushma is painted in geometric designs, obtained by first tracing the motifs with a turmeric-like yellow root and then applying special black mud onto this fixer base. Shamans say these geometric designs were obtained from the Sangariite guardian spirits who appear in visions induced by ayahuasca and other plants. 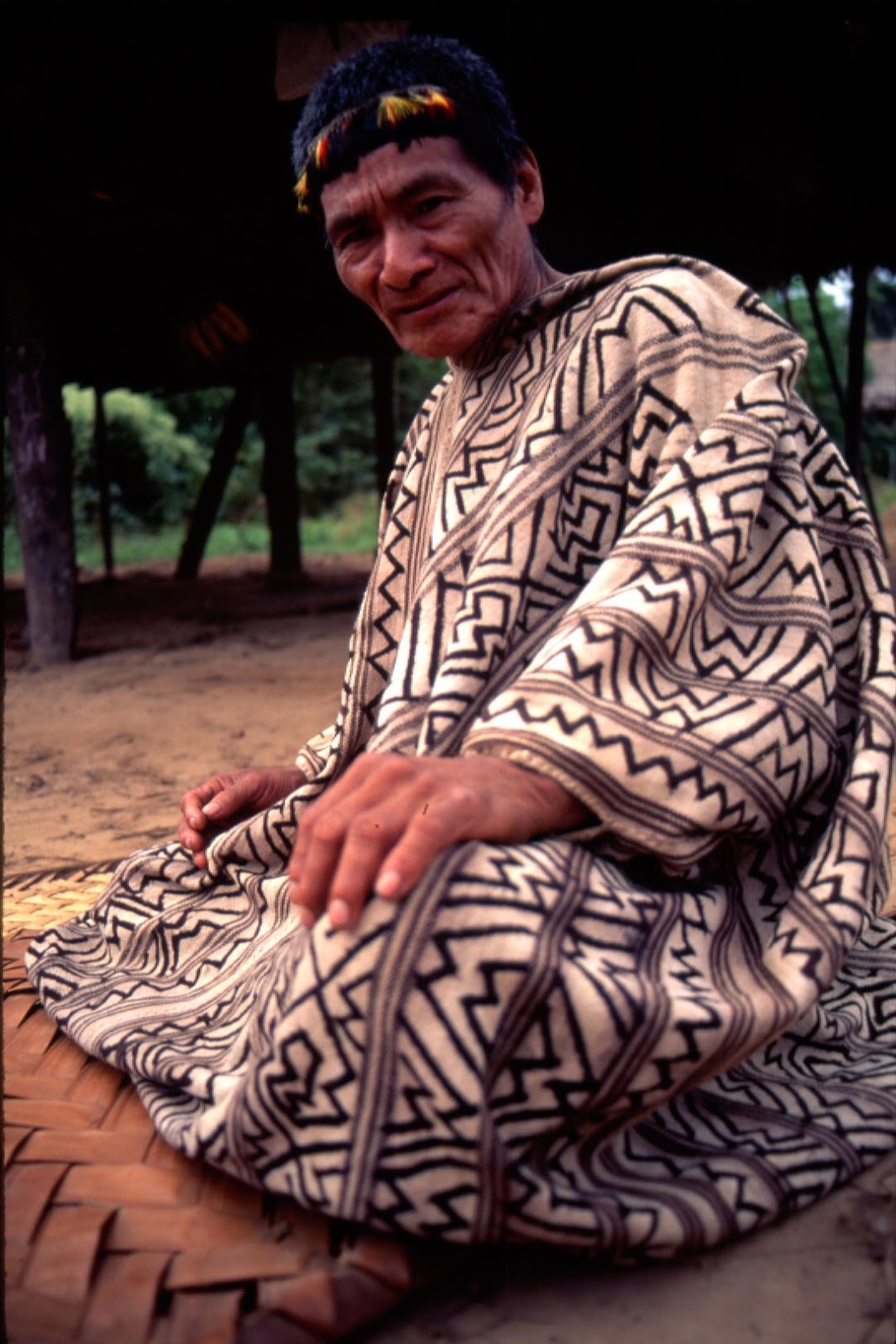 Mariano Vicente Kicha (1930?-2012) painting ayahuasca-inspired geometric designs on the spectacular cushma he wears in the film, The Spirit Hunters.

But Shanuiva knows well that the weaving of the cushma, as time-consuming as it seems, is in fact the easy part. Once she begins weaving, her work is nearly done. The hard part, the part that required the most sacrifice and “suffering” (tsipereagantsi) on her part, was the seemingly endless labor of spinning each thread of cotton during the long months of seclusion.

According to Matisgenka mythology, there was a time when women did not have to suffer to obtain cotton thread. For Heto, the “Spider Woman” still walked the earth in human form. She spun cotton effortlessly from her own belly button. Her brother, however, jealously guarded her secret and made her work endlessly for his own profit, with no respite or joy for her. He also refused the advances of several Matsigenka suitors interested in marrying her. She lived in a kind of never-ending ‘cage’ of ritual seclusion, enforced labor and abuse. Finally, in exhaustion and agony, she escaped her toils by becoming a spider. If her jealous brother had allowed her to marry, then Matsigenka women would have inherited Spider Woman’s miraculous, natural spinning ability.

Instead, Shanuiva has had to labor for months, hand-spinning miles of cotton thread to make the beautiful and practical garments that will soon be worn by her husband and children. But unlike the unfortunate Spider Woman, Shanuiva’s toils have come to an end for now, as she emerges from her seclusion to enjoy the music, the festivities, the frothy manioc beer, the moonlit night and the flock of young suitors who have come courting.