Between the Cross and the Pleiades: Missionaries, museums and a Baniwa shaman's heritage

"Right there in that deep pool," she pointed a weathered brown hand across the sand towards a bend in the river.  "That's where she told him to dump it."  She counted the items out on her fingers, "Virola snuff, a snake's head, a jaguar tooth, an earth-spirit crystal, yopo snuff.  All of his shaman's instruments.  Sophie made him do it."

Ana, a septuagenarian Cubeo woman from Colombia now living among the Baniwa people in Brazil, describes how an American Protestant missionary named Sophie Muller convinced her uncle (now long deceased) to throw his shamanistic paraphernalia into the river and convert to Christianity in the 1950s.  Shamans of the northwest Amazon use hallucinogenic snuffs and other psychoactive plants to enter the spirit world, employing various minerals, animal parts and other magical materials during trance to transform into different animals and spirit beings[1].

"And he regretted it, too.  Says he wished he had thrown his instruments in the woods, so he could go back and get them later.  But at the bottom of the river!  He was finished.  He was the last one."

I met Ana on a recent trip to the Içana and Ayari Rivers, tributaries of the Upper Rio Negro in the northwest Brazilian Amazon.  Concluding a three-year long project of exchange between the Goeldi Museum and several indigenous peoples, I traveled to the Upper Rio Negro carrying digital photographs of ethnographic objects collected in the region over a hundred years ago and deposited in museums in Brazil and Europe by German anthropologist Theodor Koch-Grünberg[2].


In Ana's village I was interviewing older people about names, uses and cultural memories of feather headdresses, jaguar-tooth necklaces, quartz cylinder pendants, bead skirts, and other objects that have not been manufactured or used by most Baniwa for at least a half century.  When she saw the shamanic snuff kit in the photographs, she became agitated and told the story about her uncle, the last shaman of her village.

Baniwa of the Pleiades Clan (Siuci) inhabit the Içana River, a tributary of the Upper Rio Negro near the border with Colombia.  Most of them converted to Protestant Christianity under the influence of the charismatic and fanatical Sophie Muller[3].  Protestant missionaries like the indomitable Sophie have dedicated themselves to studying and codifying indigenous languages in order to translate the Bible.  Using their linguistic skills and cultural knowledge, Protestant field missionaries have been especially effective at generating evangelical fervor among indigenous people while stamping out traditional religious and spiritual practices.

Yet today, the younger generation of Baniwa appears to be at least as interested in Ben 10 as in Corinthians 1:3. 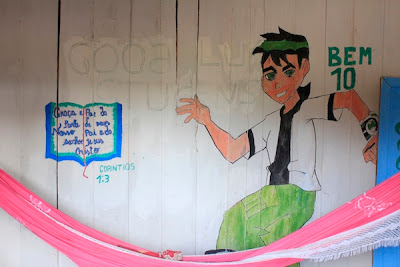 Many Baniwa are now computer literate, and some post regularly on blogs and FaceBook through satellite uplinks in indigenous schools and mission towns.  In most villages where I stopped, at least one person had a laptop or USB drive to copy the photographs of the Koch-Grünberg collections.   The journey became an of Odyssey of virtual repatriation. 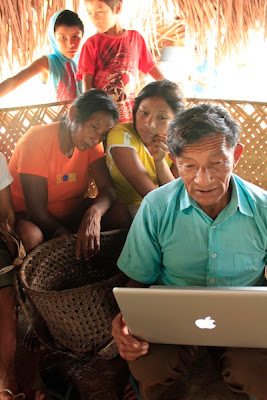 Yet as much as people were curious about the museum collections I had to show, they were more eager to know whether I had plans or suggestions for developing economic projects to generate cash income.

On the Ayari River, Baniwa of the Tinamou Clan (Hohodeni) mostly adopted Catholicism.  Though Catholic missionaries have been just as aggressive towards indigenous culture and religion, a degree of hybridization has occurred in some regions.  Thus the Baniwa of the Ayari river maintain vestiges of the religious and shamanistic practices that were abandoned by the Protestant Baniwa, including the secretive initiation cult of the sacred flutes[3,4].

When I showed photos of a hundred-year old jaguar tooth necklace to a group of Baniwa on the Ayari, one man pointed to the polished quartz cylinder at the center of the piece and said, "I have one of those.  My grandfather found it and left it to my father.  It should be at my house, unless someone threw it away."


I held my breath from the moment we entered his house until he finally located the precious piece of Baniwa heritage.  And now that he has seen the original necklace in the photograph, he hopes to make his own replica to wear to traditional dance festivals.

High up on the Ayari beyond the sacred waterfalls at Wapui, a young Baniwa shaman invited me to his house to tell the story of his recent (and costly) initiation into shamanism with an old master from Colombia.  He opened an ordinary-looking backpack decorated with cartoon characters and carefully removed the various items of his shaman's kit:  a rattle containing sacred stones, a glass medicine bottle half-full of Virola snuff, an egret-bone snuff inhaler, special herbs to chew in order to turn into a jaguar, and a collection of crystals imbued each with a different magical power. 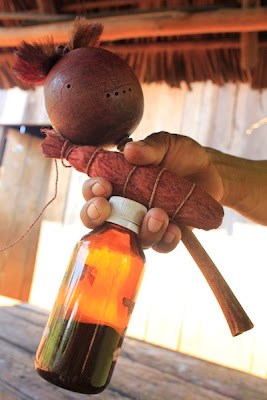 Among his collection were a worn hexagonal chunk of quartz, an antique lens (probably from some unfortunate explorer's spyglass), a modern owl-shaped glass prism, and a spectacular crystal arrowhead.  I felt shivers run down my spine as he handled each crystal and described its particular use: for seeing into people's hearts, for perceiving distant enemies or lost objects, for divining illness, and for going up to the sky and entering "the universe." 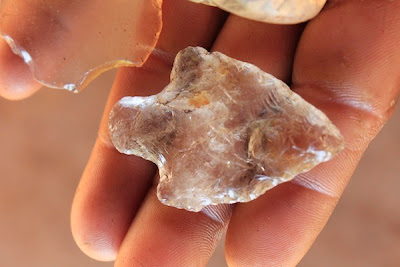 Historical collections such as those made by Koch-Grünberg and preserved in museums are an important way of safeguarding indigenous cultural heritage through changing times.  But more important is the living heritage that continues to find expression in the lives, stories and practices of indigenous people through this day. 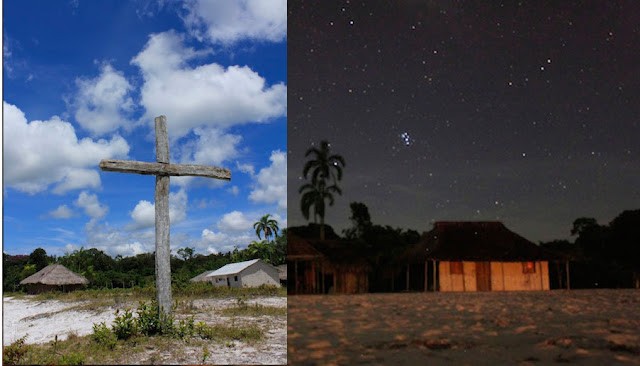 [1] Reichel-Dolmatoff, G. 1975. The Shaman and the Jaguar: A study of narcotic drugs among the Indians of Colombia. Philadelphia: Temple University Press.

[3] Wright, R. 1998. Cosmos, Self and History in Baniwa Religion: For those unborn. Austin: University of Texas Press.