If you still miss "Rainforest Crunch" ice cream, you can finally rest assured that Amazonian Indians really were behind all those Brazil nuts in the recipe, only not in quite the way that Ben & Jerry's had advertised.

Recent scientific studies show that Brazil nut groves have been managed, facilitated and probably spread throughout the Amazon by indigenous peoples since before European conquest. As highlighted in this month's issue of the Brazilian science news magazine, Revista FAPESP, "the human factor" has played an important role in shaping this emblematic rainforest landscape.


The Brazil nut comes from colossal trees up to 60 m tall (200 ft) and 16 m in circumference (53 ft) which are found in discontinuous patches throughout the Amazon basin. It is the most important non-timber commercial product of the South American rainforest, with an annual harvest in Brazil alone of over 25,000 tons employing some 200,000 people. The grove-like nature of Brazil nut stands led early researchers like Adolpho Ducke to guess that they might be plantations left behind by ancient indigenous peoples.[2] However more recent scientific research criticized this theory, claiming that the agouti, a large tropical rodent, was solely responsible for their dispersal.[3]


However new studies have reasserted an important role for indigenous peoples and their modern descendants in spreading and maintaining Brazil nut groves throughout the Amazon. "Made in Brazil," published last year in Economic Botany[4], presents results of a research project I initiated in 2000 with plant geneticists Rogerio Gribel and Maristerra Lemes, and continued to develop through later collaborations with archeologist Eduardo Neves and linguist Henri Ramirez.

The softball-sized seed case within which the Brazil "nuts" are held is extremely hard and heavy, making it particularly inefficient for long-distance dispersal. While other trees in the same family (Lecythidaceae) have seed cases that open when ripe, the Brazil nut's seed case remains tightly sealed and nearly impenetrable. Agoutis are virtually the only animals with teeth sharp enough to open the seed case. Although agoutis do play a role in dispersing Brazil nut seeds a short distance within existing groves, it is hard to explain how they alone could have spread the seeds to form discrete, far-flung groves across much of the Amazon basin. If the Brazil nut was spread throughout its vast range by natural processes only, it would have taken a very long time.

Yet our genetic studies comparing eight widely separated Brazil nut groves across the entire basin indicate that all may be descended from a single original seed bank that was dispersed quickly through a large area.[5] The observed genetic pattern -- low overall genetic variability, and greater variability within groves than between them -- is rare in wild trees but common in cultivated trees like Eucalyptus[6], indicating a strong role of human intervention.

This result is consistent with Ducke's original suggestion that the Brazil nut was planted or managed by ancient indigenous populations. Indeed, the 11,000 year-old archeological site of Pedra Pintada, near the modern city of Santarém, contains Brazil nut remains.[7]

To further test this possibility, linguist Henri Ramirez collected and analyzed the vocabulary for Brazil nut in over 70 indigenous languages. The pattern of loan words and tentative reconstructions of proto-language terms suggests that Brazil nut was present and culturally important some 2000 to 4000 years ago in the northern part of the Amazon basin where the the Arawak and Carib language families originated, encompassing the region where Brazil nuts were first documented in the archeological record at Pedra Pintada.

In the southern and western part of the basin, by contrast, languages in the Tupi family and others refer to the Brazil nut either with apparent loan words, or words derived from the term for "peanut," a cultigen first domesticated in the southern Amazon. This raises the possibility that the Brazil nut was not originally present or culturally important in these regions. Archeologist Eurico Muller, who has conducted excavations in Rondônia in the southern Amazon, was surprised to find no evidence of Brazil nut consumption in ancient sites, despite how dominant Brazil nut is in the current landscape.

Though somewhat speculative, these results provide further evidence that the Brazil nut may have been spread by ancient indigenous peoples, extending its range as new groups were introduced to the seed crop by their neighbors.

Indeed, the distribution of the Brazil nut, found in central and eastern Amazonia but largely absent in the western part of the basin, closely matches the distribution of "terra preta do índio" ('indigenous black earth'), patches of highly fertile dark soil found in association with ancient Amazonian agricultural settlements.[8,9] Thus Brazil nuts may have been managed or cultivated as part of the intensive agricultural and agroforestry practices that permitted indigenous populations in some parts of the Amazon to grow and flourish during and after the first millennium A.D.[10,11]

More recent work published in Human Ecology by Ricardo Scoles and Rogerio Gribel[12] contributes further evidence in favor of this interpretation by elucidating how management practices from ancient through more recent times are crucial to the maintenance, productivity and perhaps establishment of Brazil nut groves.

And yet the ancient legacy of Amazonian peoples lives on in the global Brazil nut trade: think about that the next time you dig into a bag of trail mix. 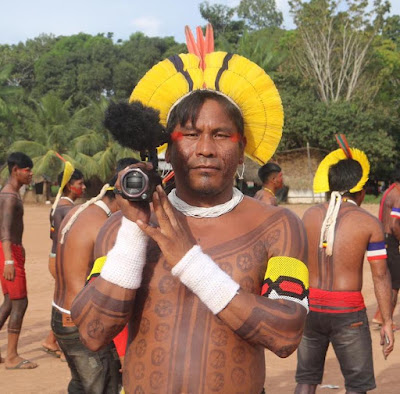