Might at the Museum: Indigenous groups revisit their heritage at the Goeldi Museum

Visitors idling on a hot Saturday afternoon through the shady grounds of the Goeldi Museum’s Zoobotanical Park in downtown Belém, Brazil, gawked and snapped photos of the unanticipated spectacle:  more than thirty Kayapó Indians in full ceremonial regalia had just entered through the front gate. I walked alongside Mro-ô, leader of the Kayapó village of Turedjam in southern Pará state. I had invited Mro-ô and his people to participate in the inauguration of a new exhibit[1] celebrating the Goeldi Museum’s 145 years at the forefront of research into the cultural diversity and human history of the Amazon basin. The exhibit, running from June through September, includes ethnographic artifacts collected among the Kayapó by different researchers from the early 1900s through the present.

Ethnographic collections have typically been regarded as “graveyards of objects”[2] belonging to cultures that are already extinct or in a process of extinction. However in recent decades, indigenous peoples of the Amazon have conquered new forms of political engagement and developed unique interfaces with modernity. Such changes demand a new approach to museum science and ethnographic collections. The Goeldi Museum has pioneered a kind of museum science that puts indigenous peoples into dialog with their own cultural heritage, an approach we call “ethnomuseology.” According to Lucia van Velthem, curator of the Goeldi collections for many years, “ethnographic objects possess a relationship of continuity with their cultures of origin.”[3] 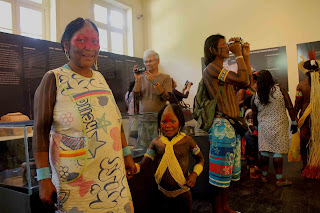 The visit of the Kayapó to the museum in late June represents the culmination of an ongoing research project that is built around this philosophy.

With funding from the Brazilian National Research Council (CNPq), I am leading a project with a group of researchers from the Goeldi and other institutions[4] to study museum artifacts with the participation and collaboration of indigenous informants from the cultures of origin. The project has focused on two important ethnographic collections from the early 20th century housed at the Goeldi: a large set of Kayapó objects gathered by Frei Gil de Vila Nova between 1902 and 1903, and artifacts from the Upper Rio Negro collected by the German ethnologist Theodor Koch-Grünberg during his pioneering 1903-1905 expedition.

Kayapó consultants from several villages in southern Pará have visited the Goeldi’s ethnographic collections and participated in a number of museum exhibits. Baniwa indigenous consultants from the Aiary and Içana Rivers, where Koch-Grünberg carried out part of his expedition, have likewise come to study and document their own cultural heritage. Indigenous youths from both groups have received digital cameras and training to produce and edit their own videos.

Among the Baniwa, utilitarian elements of material culture like basketry are still manufactured, while ritual objects associated with male initiation and the cult of the sacred flutes have been largely lost or marginalized due to missionary activity and other cultural changes over the past century. Some ritual objects have not been manufactured for more than two generations. Our Baniwa visitors were especially interested in documenting ritual objects that have been lost over the past century so that they can manufacture and use them again. The Museum is collaborating with the Baniwa in projects of cultural revival that have gained strength in recent years in the Upper Rio Negro [see prior posting: Sacred Flutes Redux].

Among the Kayapó we observed a certain reluctance to handle objects from the past, especially body ornaments, because of the intimate ongoing relationship of such objects to people who are now dead. The Kayapó maintain a rich ceremonial life to this day, and nearly all the types of objects present in the 1902 collection are still manufactured and used through the present.

Although the Kayapó are proud of their heritage and are bolstered by a fierce reputation and international support, their forests and their way of life face growing threats due to deforestation and ecological degradation in surrounding lands. The recent and controversial approval of the Belo Monte dam project on the Xingú river is just one among a myriad of planned development projects that will have wide reaching effects on indigenous and other populations of this region.

After their visit to the exhibit, the Kayapó performed a ceremonial dance in downtown Belém at an international gathering of anthropologists[5] to show the world that their culture is not only preserved in the museum, but also thrives in the modern world. 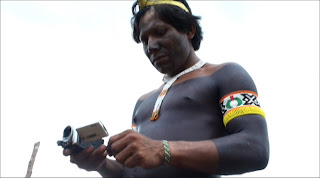