Banana Diplomacy: "First contact" with isolated tribe in the Amazon

They were separated only by the narrow course of the Envira river. From a distance of a few meters they tried to speak to each other. As the video clip recently released by Funai shows, Fernando Ashaninka entered the water as two Xatanawa mirrored his motions from the opposite bank. One Txapanawa[1] man remained behind with a shotgun (apparently captured from an unfortunate logger) in case of an attack. After unsuccessful attempts at spoken communication they turned to gestures  and eventually Fernando gave them bananas. The Txapanawa then follow the Ashaninka and FUNAI team to the village and ask for clothing . Watching the video, one only hopes that the used clothes they receive aren’t contaminated with flu virus or other harmful diseases. The speaker on the video announces that this was the "first contact" with this group. But there had been in fact several previous interactions between them and the Ashaninka community of Simpatia. 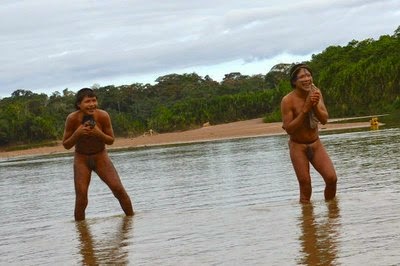 The seven Txapanawa survivors of the recent massacre who reached out to Simpatia included five men and two women, in addition to some 40 to 100 that stayed behind in the forest. They first appeared on June 10, to take iron goods, clothes and food. An Ashaninka man, Raimundinho, initially considered this an act of “thievery,” but the village leader “Carijó” quickly informed FUNAI and organized and informed the village to avoid violent confrontations. Rather than thieves, they were more like diplomats, coming on an urgent peace-making mission.

Members of the same group had already made enigmatic appearances at other Ashaninka and Kulina villages along the Envira River, according to the Indigenous Missionary Council (CIMI). In March of 2014, Renato Santana from CIMI told journalist Scott Wallace, “Women are afraid to go into the forest to tend their gardens for fear of abduction.” CIMI released additional aerial photographs of the group in April and demanded that FUNAI act to protect their territory. The FUNAI post at Xinane, which had been established as an advanced base to handle this situation, has been closed since it was attacked by drug traffickers in 2011.

After their dramatic, brief appearance at Simpatia on June 10, FUNAI began preparing for an eminent contact, which came on June 27 with an initial peaceful encounter followed by additional visits on June 29 and 30, culminating in a longer meeting on July 4, when the Txapanawa emissaries remained for several hours at Simpatia before returning to the forest.

CONTINUE READING the full article, the second in a three-part series by Felipe Milanez and Glenn Shepard at Indian Country Today:

[1]. Note: original reports suggested these people were known as the Xatanawa, close relatives of the Chitonahua of Peru. However more conversations with the group carried out by FUNAI through translators suggest they belong to a distinctive group speaking a language with important dialect variations, and that their name should be rendered as Txapanawa (J.C. Meirelles, personal communication).
Posted by Glenn H. Shepard at 2:16 PM